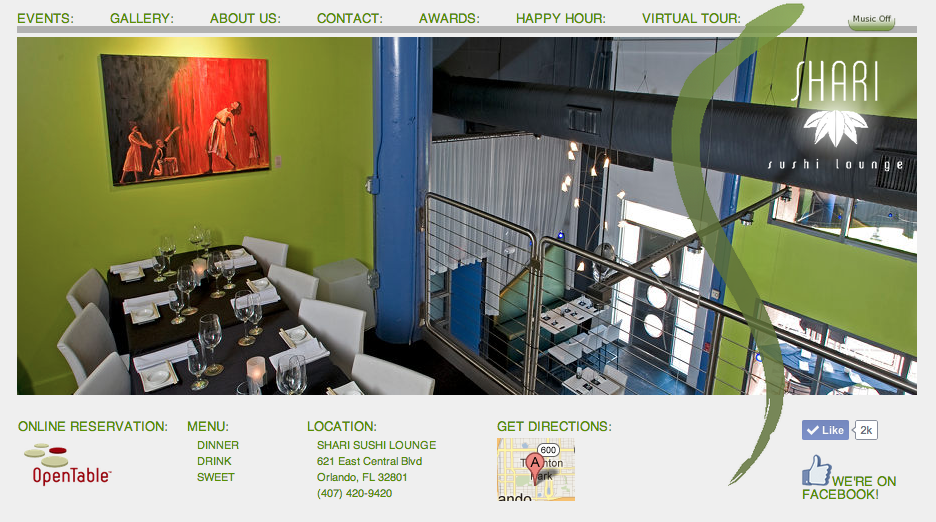 For Valentine's Day, Errol took me to an awesome sushi place, Shari Sushi Lounge. I went on my flight to Orlando all dressed up for dinner and we went straight there. The picture above is a screen shot of their website, with a picture of where we were in the restaurant. We were on the second floor, and it felt like a private area. It was quieter and more romantic - not to say the commotion downstairs wouldn't be enjoyable too!

Errol and I are self-proclaimed sushi snobs. We've been to so many sushi places and prefer raw, raw, raw fish. So when we sat down and perused the menu, we were pleased to see this place doesn't have California roll or Philadelphia roll. All rolls were considered "Specialty".

We started out with Toro Tartare:
Then the Beauty and the Beast Roll:
And the grand finale was the Sushi Sashimi Moriawase: Combination of nigiri and sashimi selected by the Chef, served with fresh Japanese wasabi and imported soy sauce.

Errol and I have had numerous plates of nigiri/sashimi. It's always a combination of great pieces of escolar, salmon, and tuna; plus fake crab and disgusting shrimp (and I love shrimp). Since it's "Chef's choice" we can never dictate that what we really want is just the good stuff (of course). So we devised a plan to say that one of us has a shellfish allergy so we can't have shrimp or [fake] crab.

We did it this time, and our waitress said, "Don't worry there's no shrimp or crab." We literally raised our eyebrows. But oooooh man when our platter came out we were knocked out of our seats. It was the most amazing presentation we had ever seen.

Pieces of nigiri on one section of the plate as if they were swimming in water.

Then the martini glass had a rose bud made of pieces of white fish and surrounded by slices of strawberries. This was an AMAZING presentation!

To round out the flavors was a specially imported Japanese soy sauce (in the shot glass). It was saltier (and I normally use reduced-sodium) but when you taste it, the flavor is just fuller. It's hard to explain but it wasn't about the salt, but able the breadth of flavor. 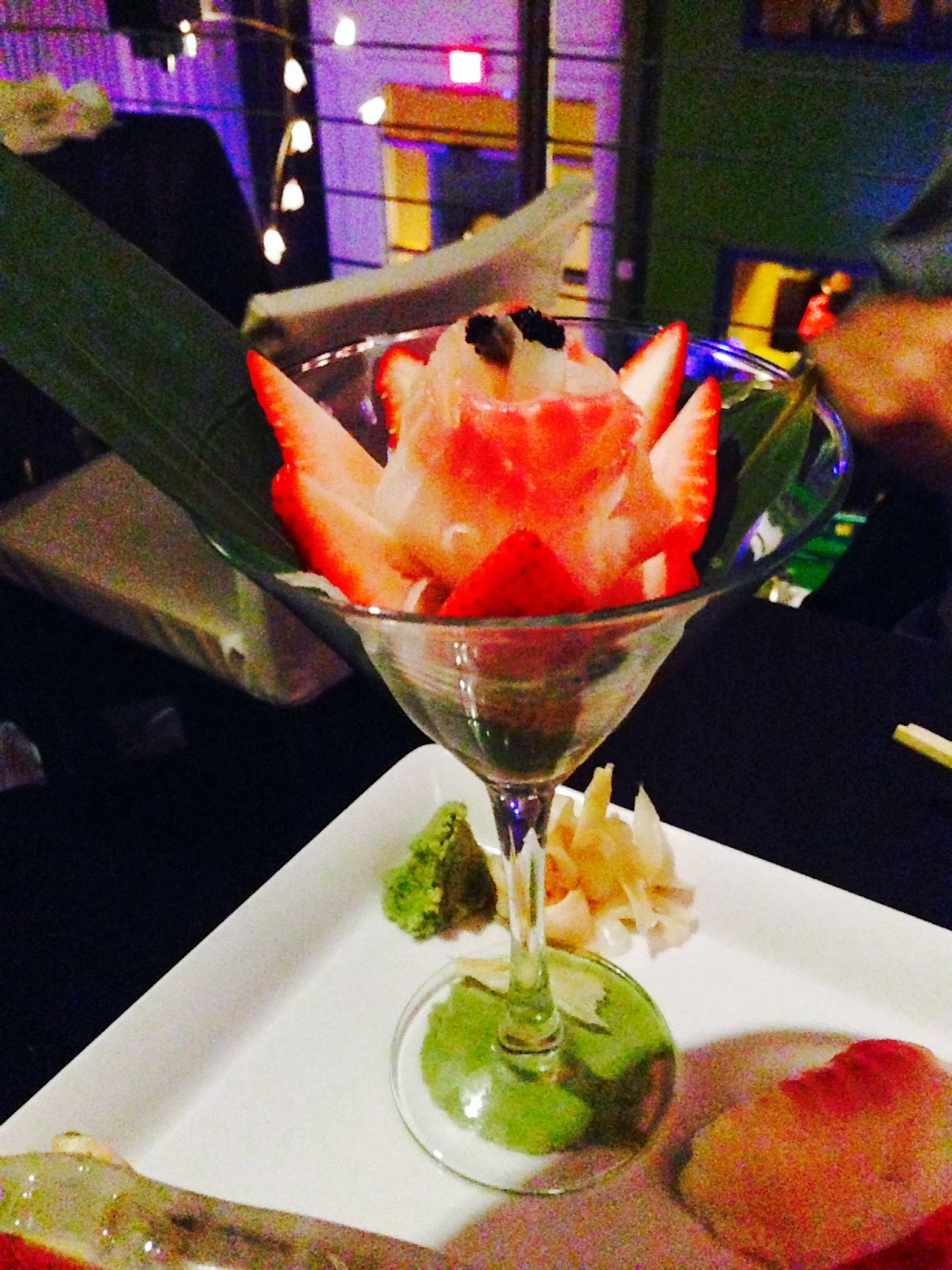 Errol and I took our sweet time to finish every last bit of our dinner. It was our first dinner together since the beginning of January, so it really was a lovely time for numerous reasons. I was definitely spoiled by this dinner and loved every minute of it.

Last week was a crazy whirlwind of travel, sickness, and snow.

Sunday I drove back from Charleston, SC after a quick weekend trip with fellow Phi Lambda Sigma Leadership Conference. Right when I got back home I started to feel achey, and lo and behold my temperature was in the triple digits by sun down. The temperature fluctuated from 99-102 degrees F until Wednesday when it finally subsided.

Come Wednesday, Winter Storm Pax hit North Carolina pretty hard. Luckily my classes were canceled already (but not the University), so I was home already. Around noon, it started to snow very aggressively to the point where within an hour, the roads were un-drivable.

It was Atlanta Part 2. The University proceeded to cancel all classes AND close all offices right in the middle of the horrible snow. There are pictures of classmates walking 3 miles home in the heavy snow because the buses were stuck in the crazy gridlock caused by wreck after wreck. The news said police departments fielded 600 calls in a span of 3 hours! Here's a traffic shot from Google Maps:

Again, I was in the comfort of my blankets watching the snow all day long. Normally, on the rare chance it snows in Chapel Hill, we wait all day for it only for the snow to come for 30 minutes at 11PM. This time it was hours on hours of heavy, heavy snow that didn't stop until the middle of the night.

Wednesday was also the scheduled Duke vs. UNC basketball game which I actually had tickets for! My roommate was actually about to head out the door to walk 4 miles in the snow to get to the Dean Dome, when the Duke game was postponed. It made so many people angry because they were either waiting outside since 12PM in the heavy snow waiting to get in, or drive for hours to go just a few miles to make it to campus when they finally decided to postpone it.

The next day, there was no precipitation at the start of the day. In the afternoon, freezing rain started to fall, then sleet, then finally snow again. This time, I had the urge to venture outside! 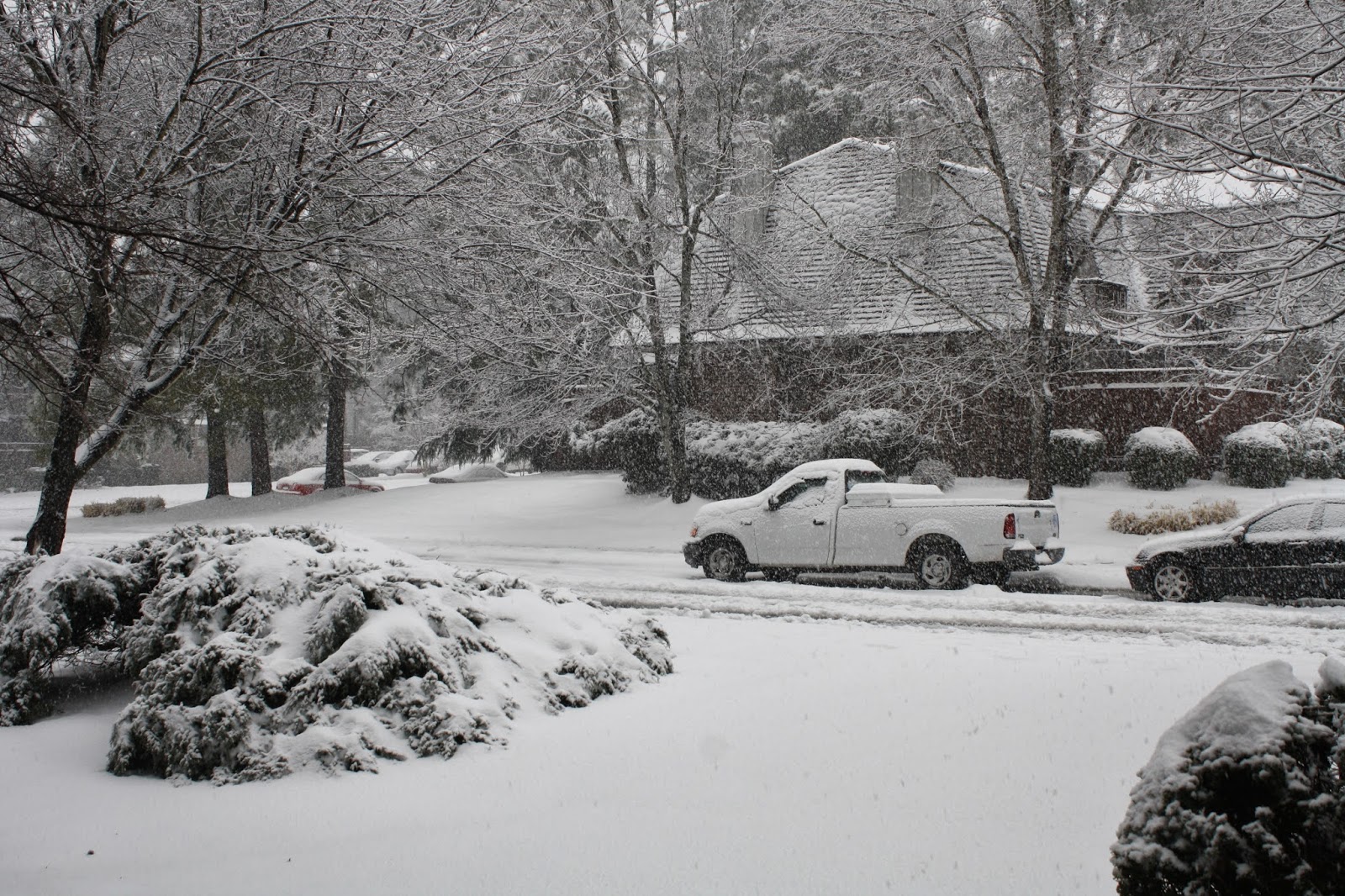 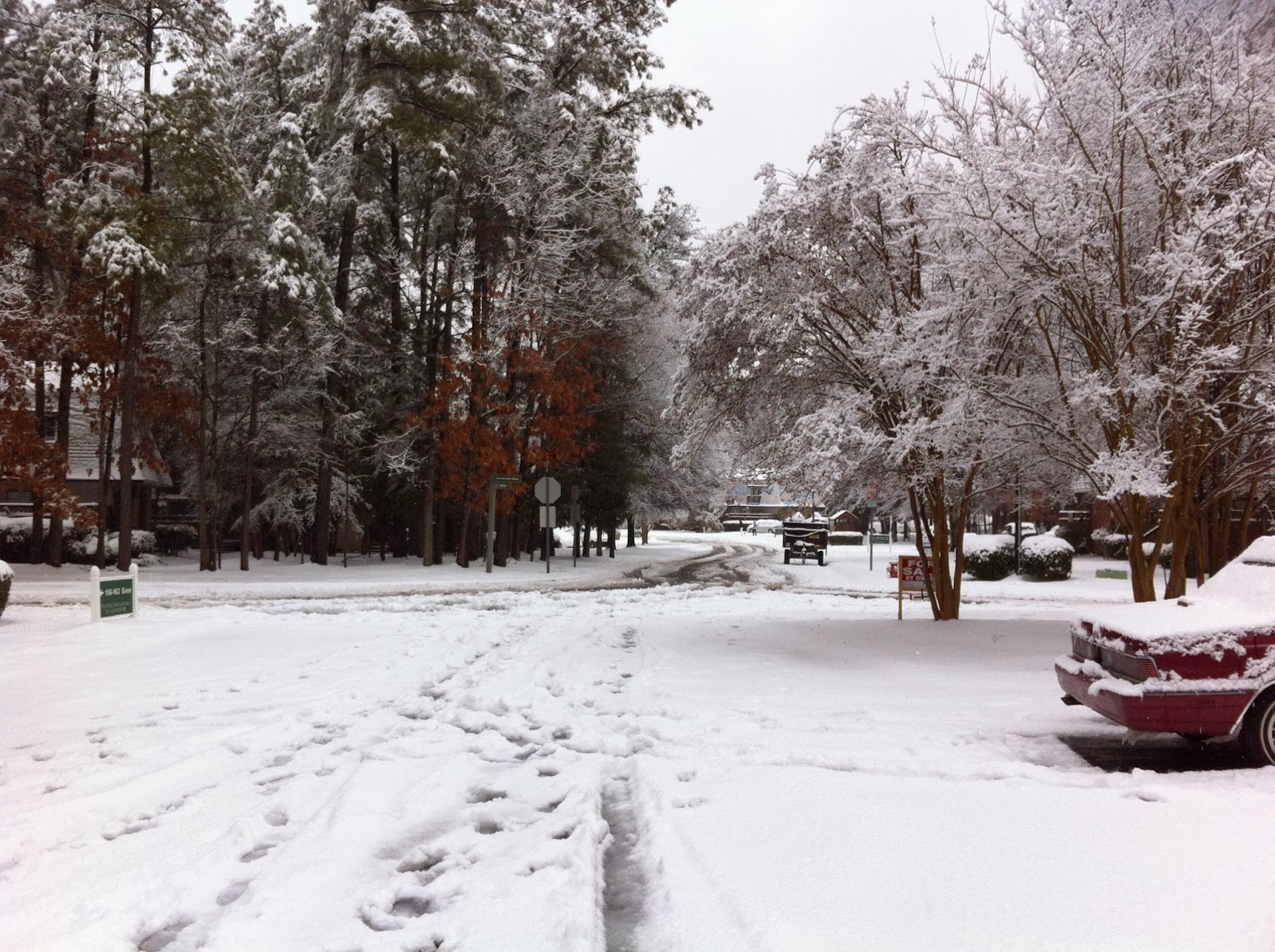 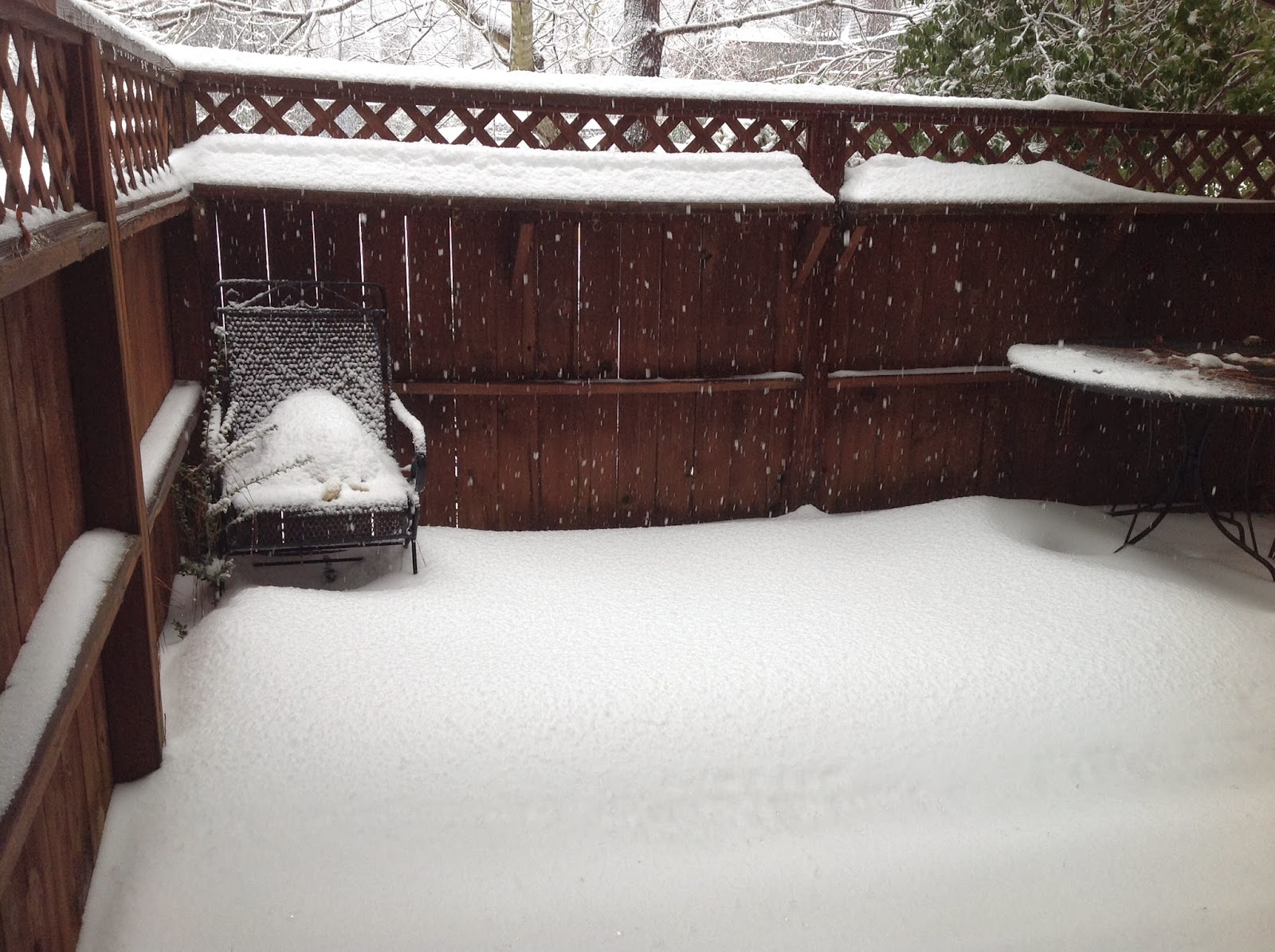 My roommate and I decided to walk to our friend's house on the other side of the neighborhood. This is a shot of the street on the way there. You can't even see the road! There were very rarely any cars that came through, and you could barely see the curb. 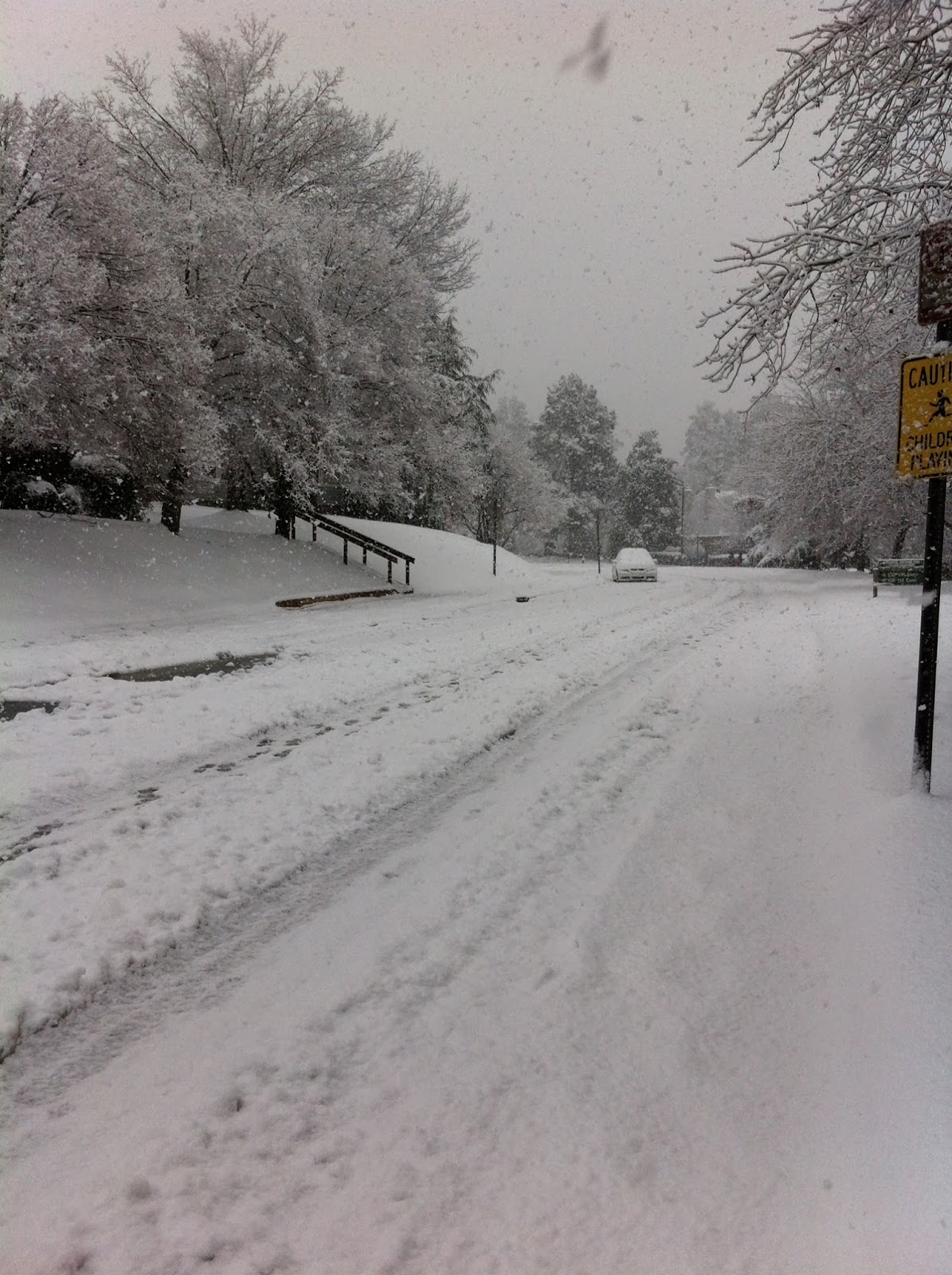 This is how deep our feet were: 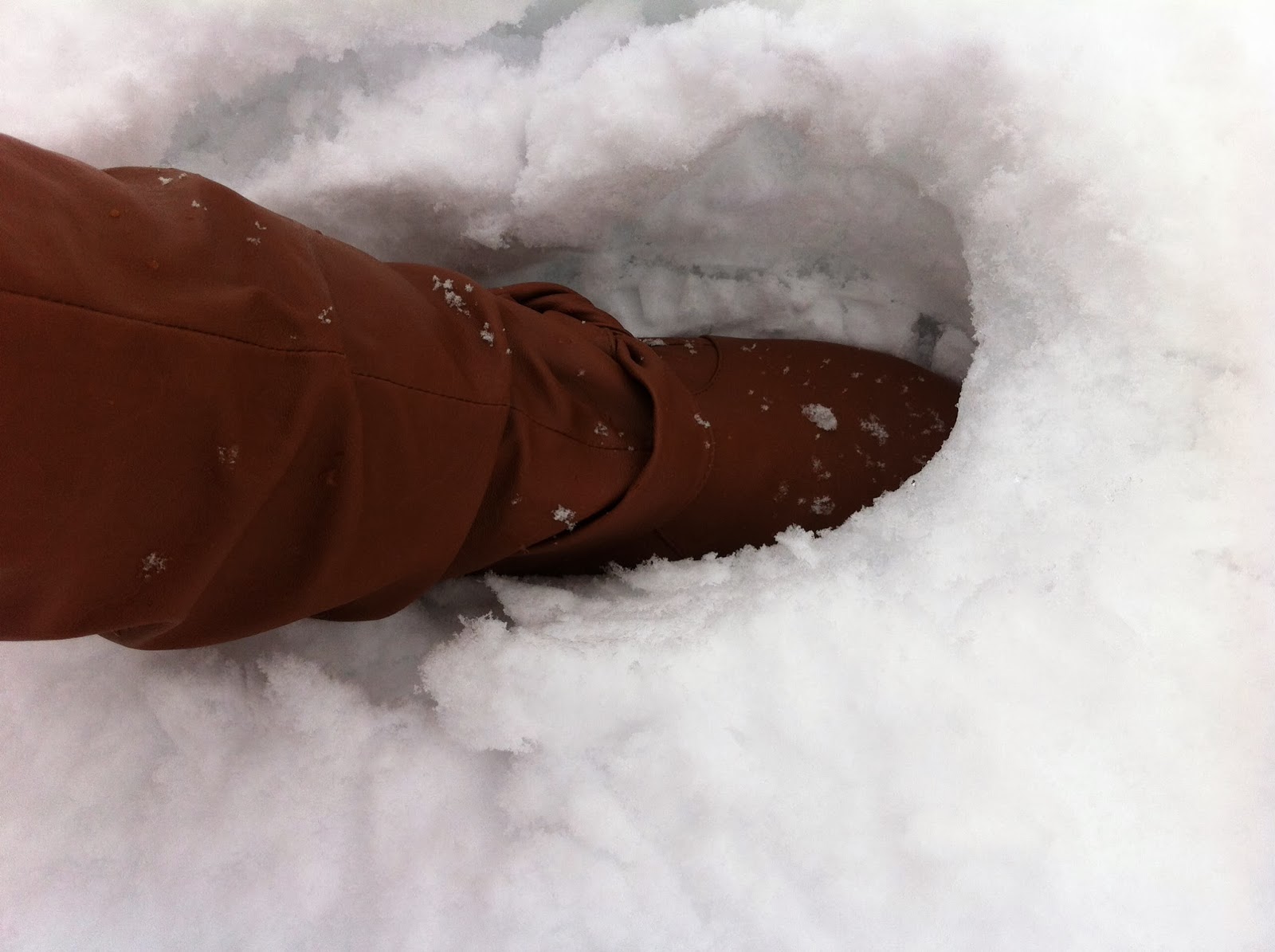 Even going up some stairs was an adventure: 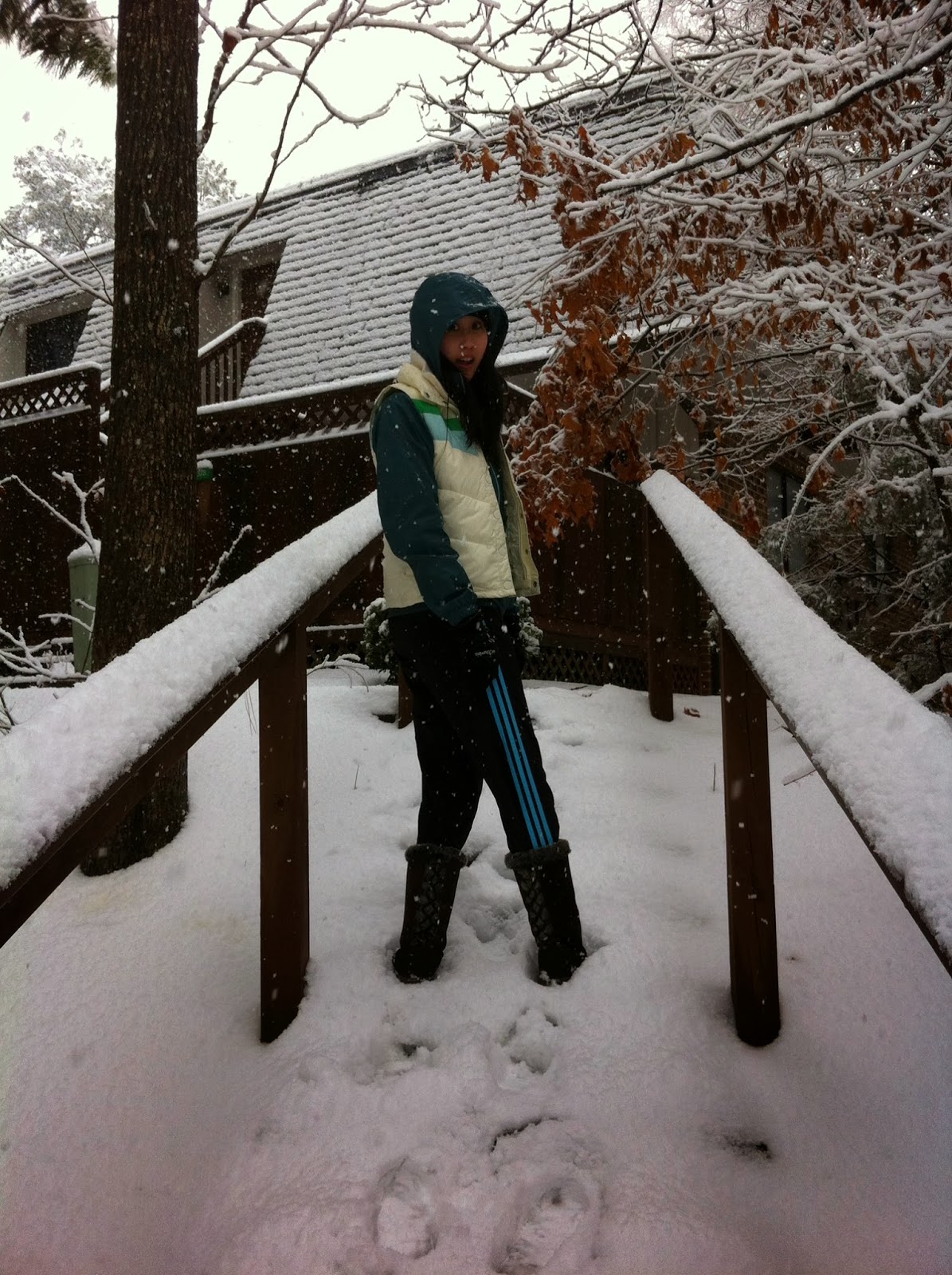 Then before going back inside, we finished up our bucket list of throwing snow balls... 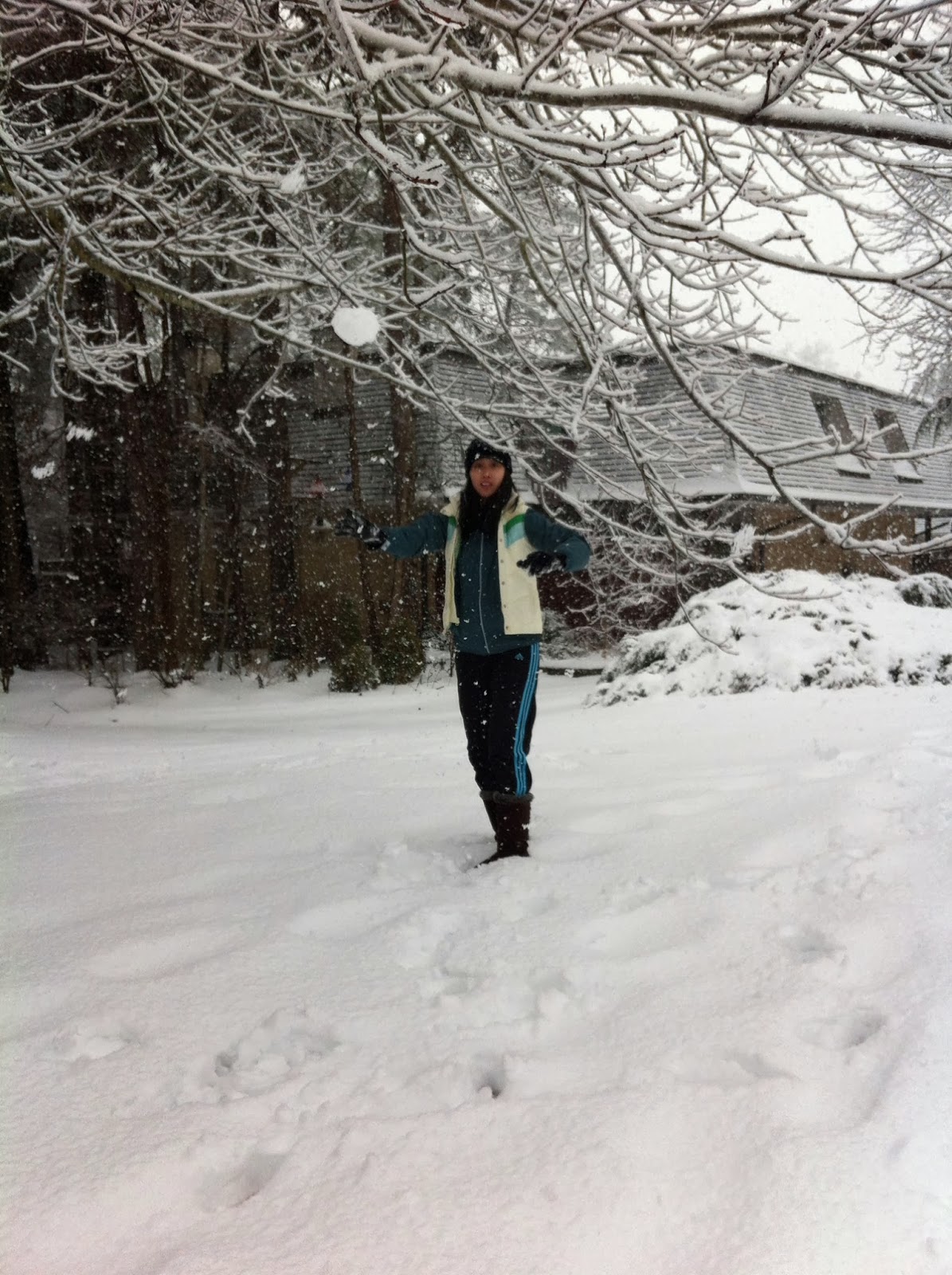 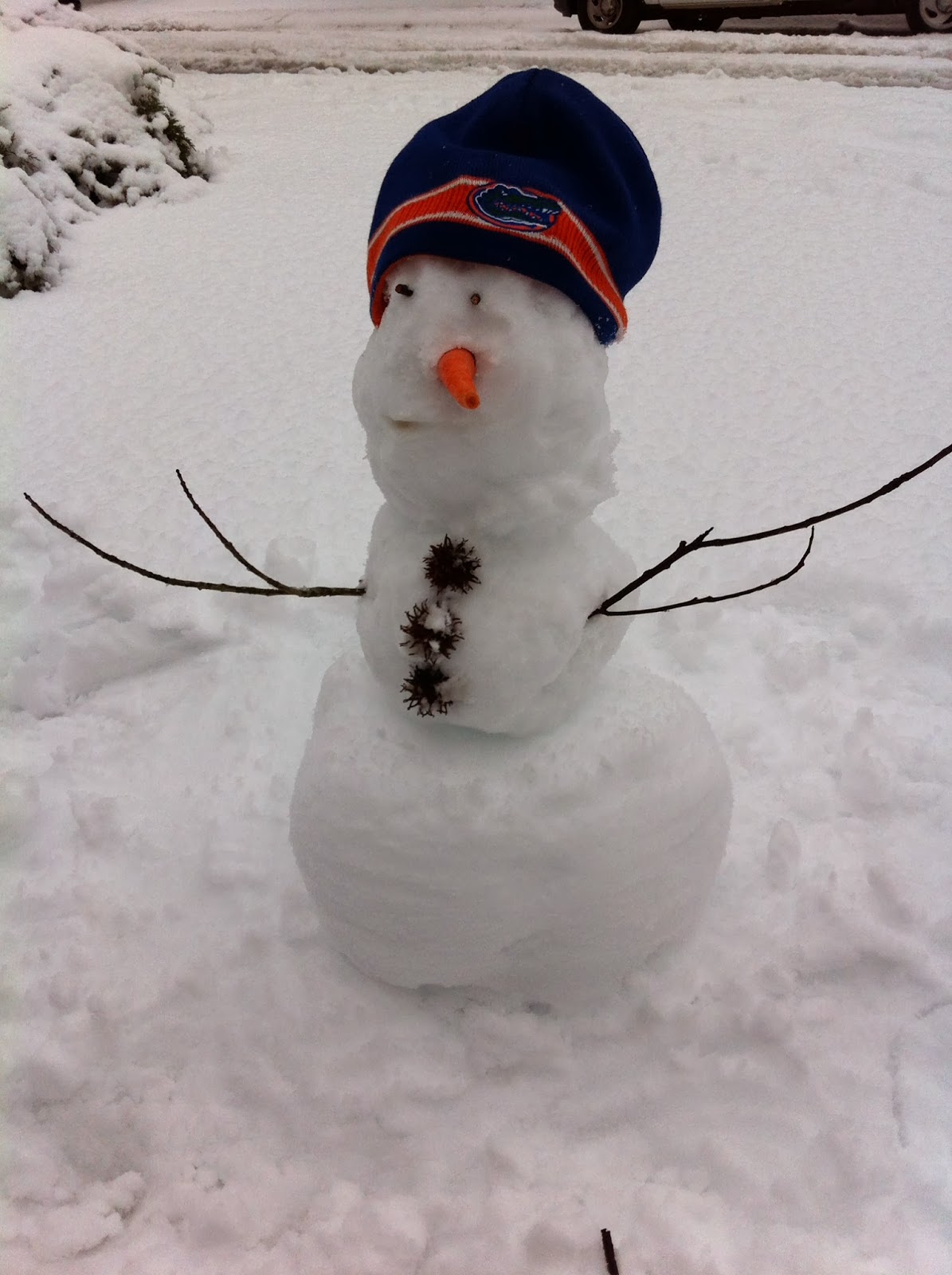 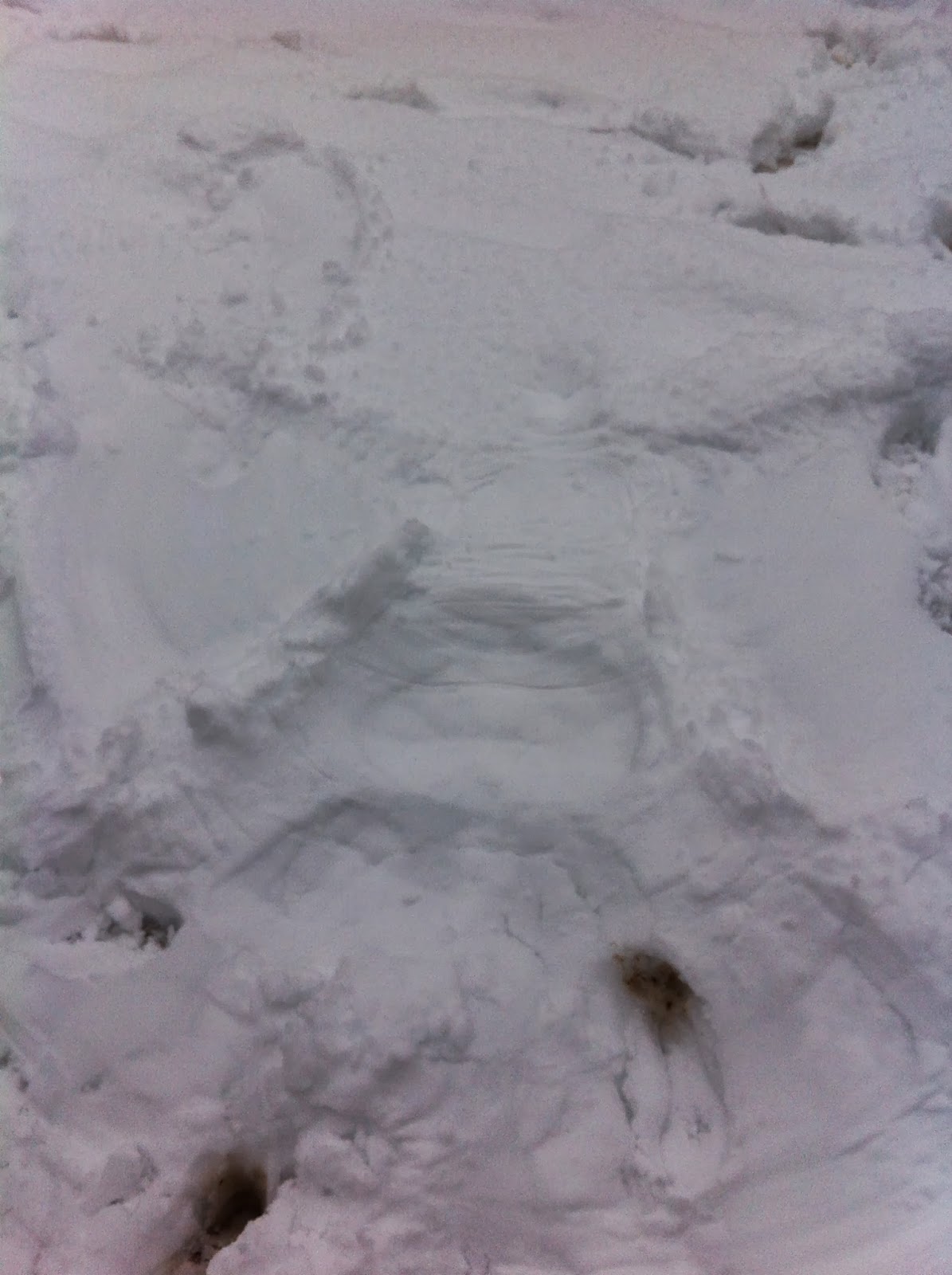 So I had Wednesday, Thursday, and Friday of last week off. I'm not complaining! 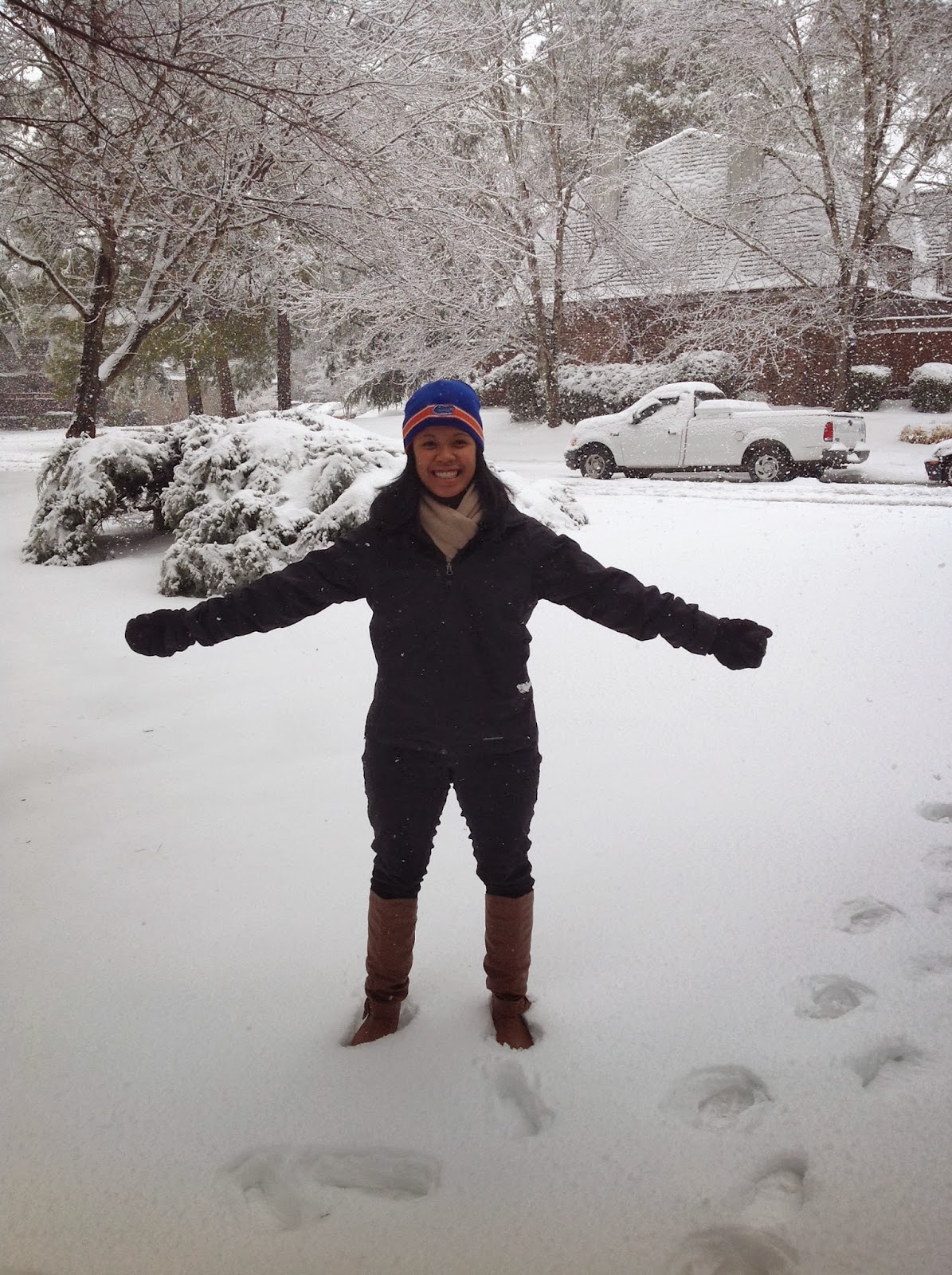 Posted by Unknown at 9:39 PM No comments:

Even though I went on a huge hiatus from blogging last year I was still taking pictures of food I made in the hopes I'd get the chance to eventually post it. Well, the time has come (or my free time is finally here) so here's a catch up post from a meal Errol and I made last summer (gasp!) for Errol's final visit before school started.

First we made some pasta (see my How-To from Florence!). Then mixed some ricotta cheese, thawed frozen spinach, salt and pepper to taste, and an egg to bind it all. 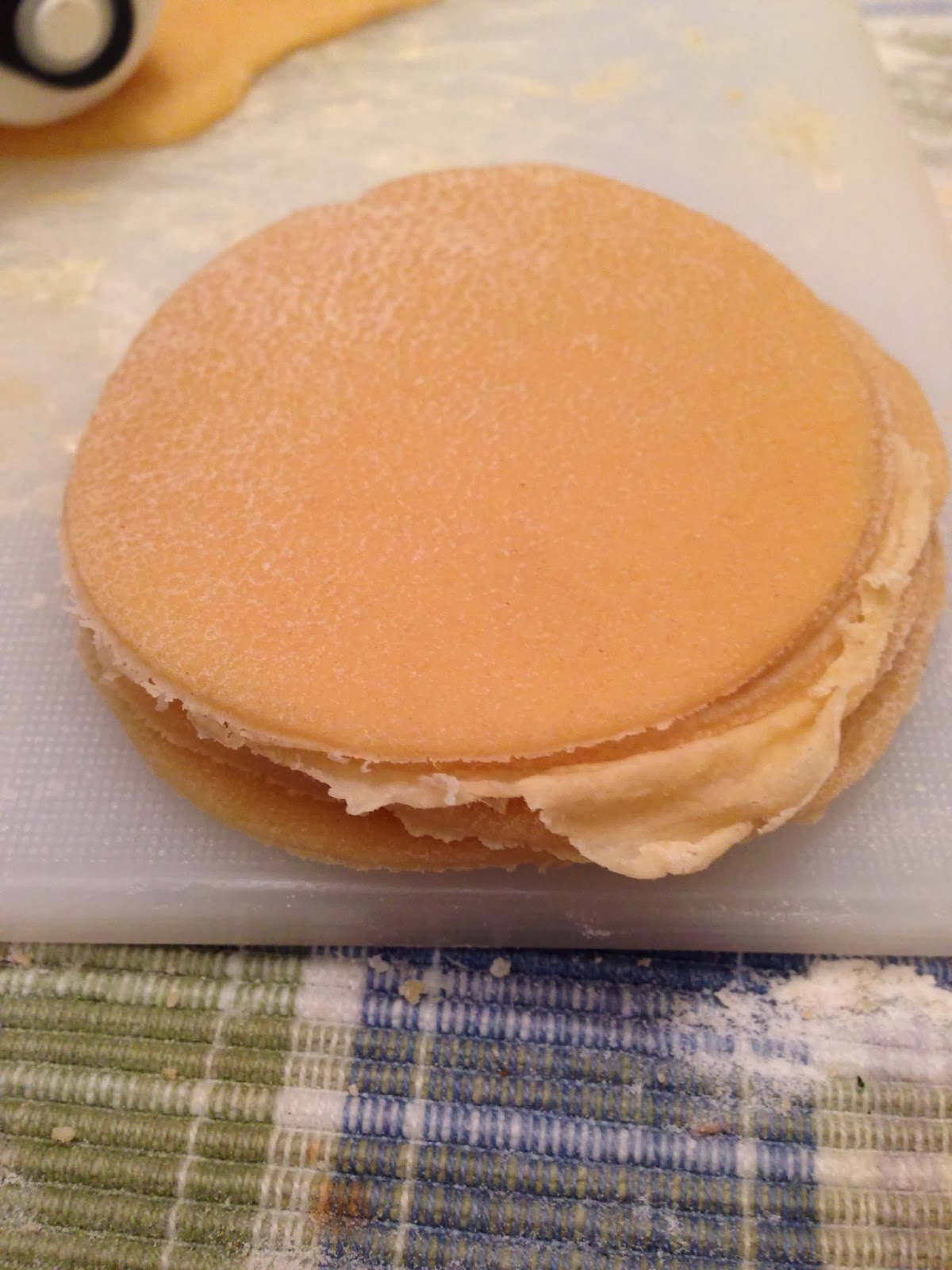 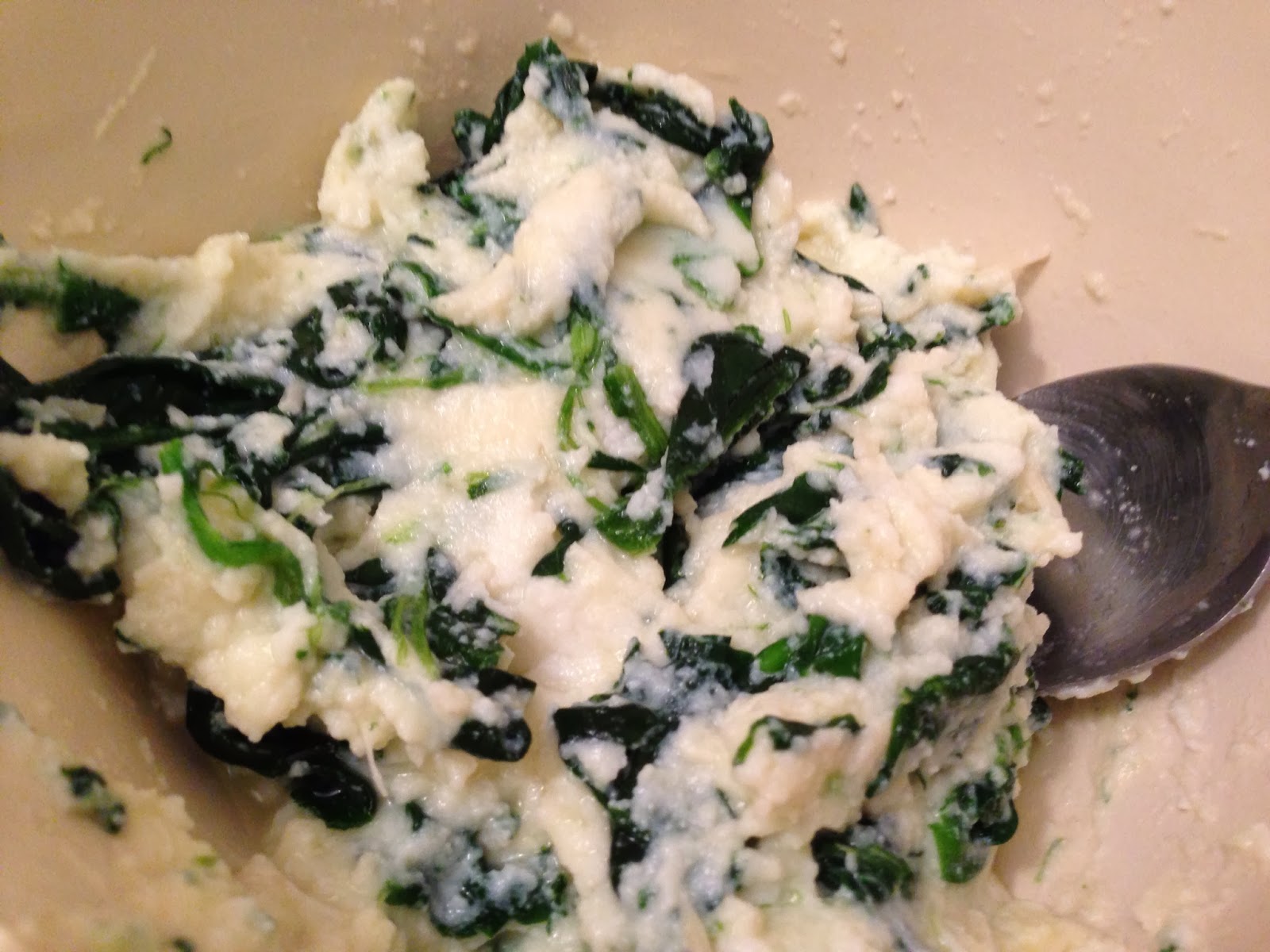 Place about a tablespoon of the mixture into the middle, place another layer of pasta and crimp the edges with a fork. 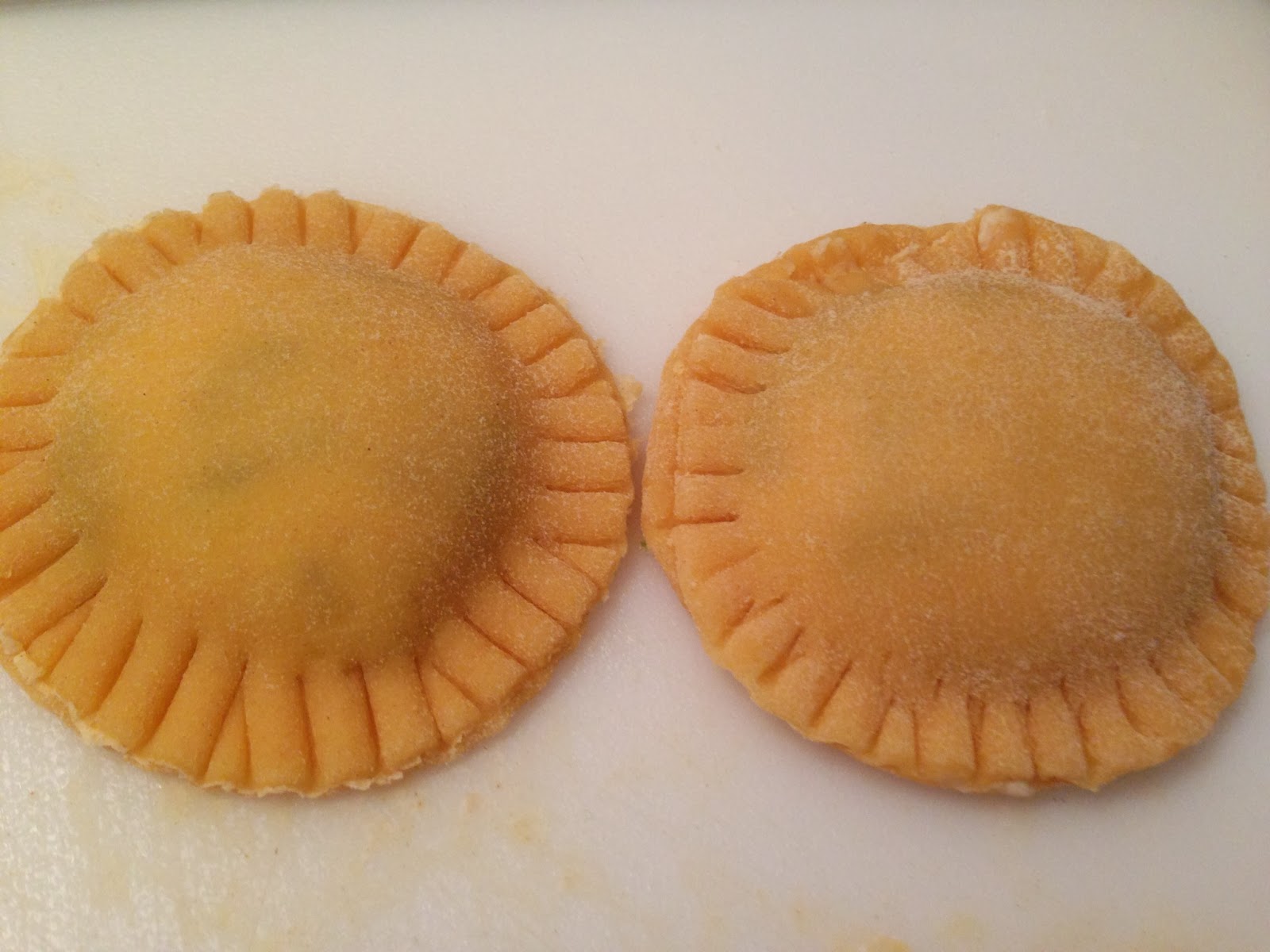 Oh hey, there's Errol! This was his first time making pasta because he did not take the cooking class with me in Florence. He was enjoying his first lesson :) 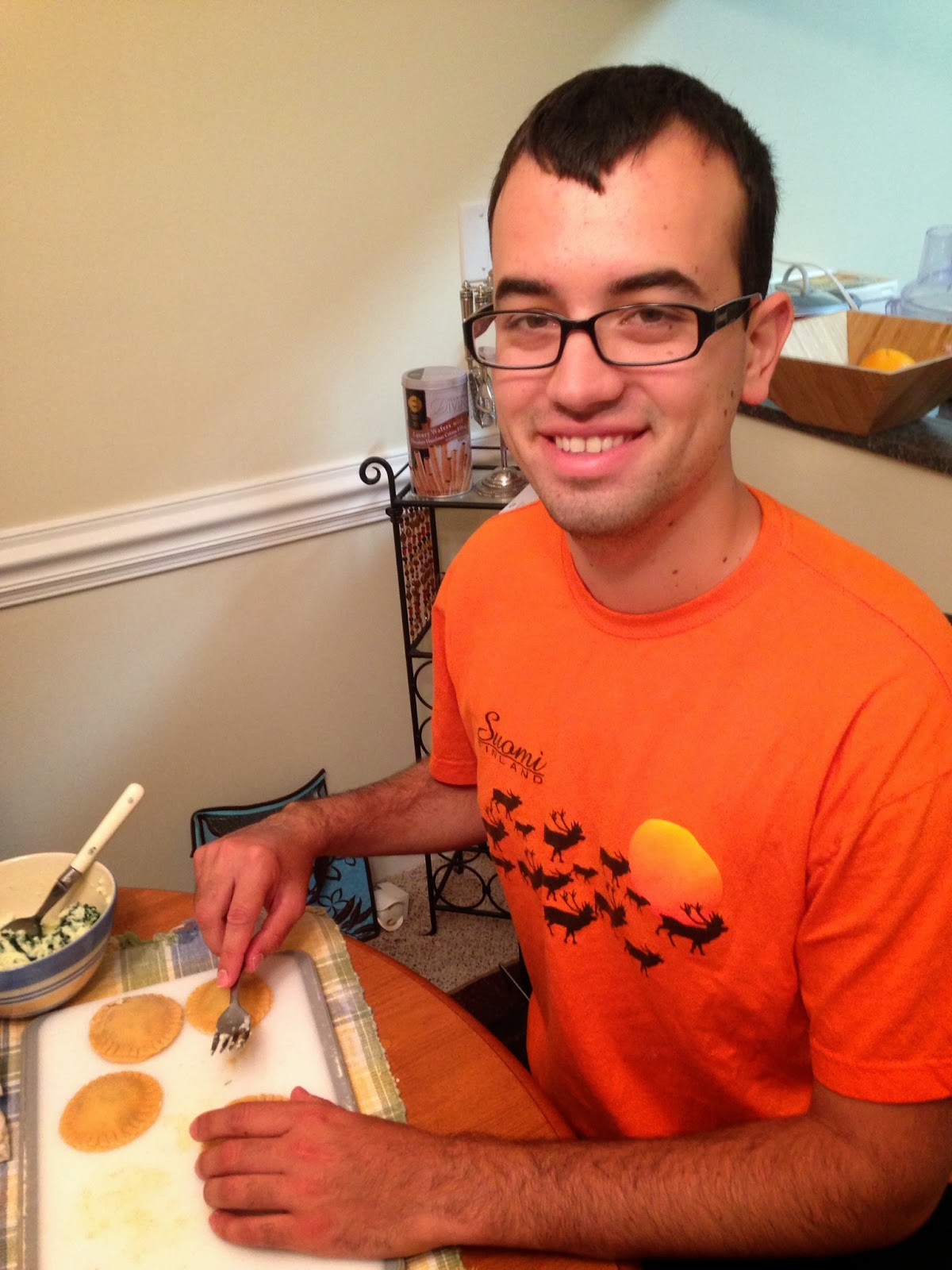 Once the ravioli are finished, place them into boiling water. I would recommend a larger pot to boil and/or cook in batches. The nice thing about handmade pasta is that it just takes a few minutes for it to be cooked compared to dried! 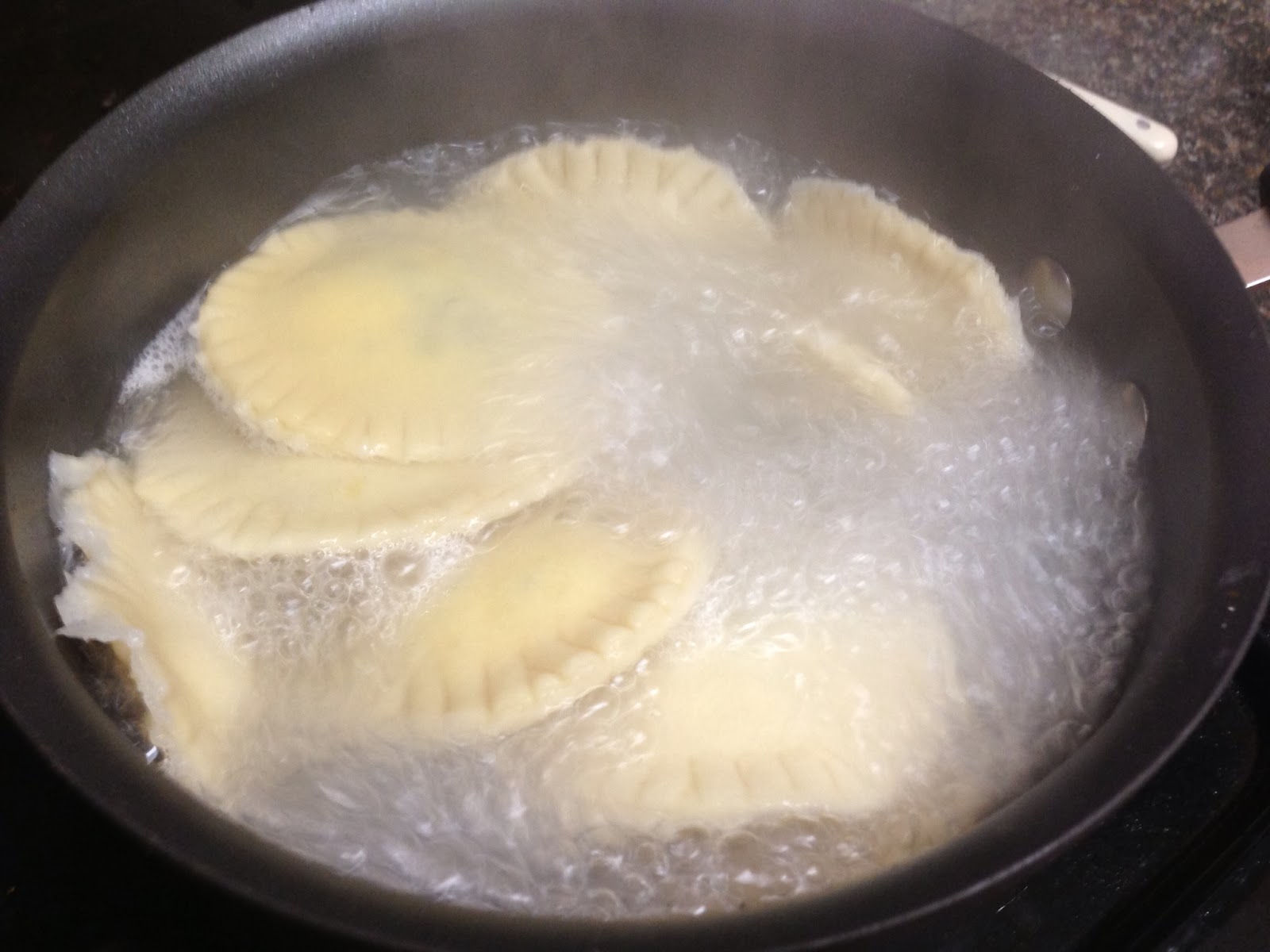 In the meantime, make the sauce! Melt a few tablespoons of butter and then place some whole sage leaves into the hot butter until they are slightly wilted. 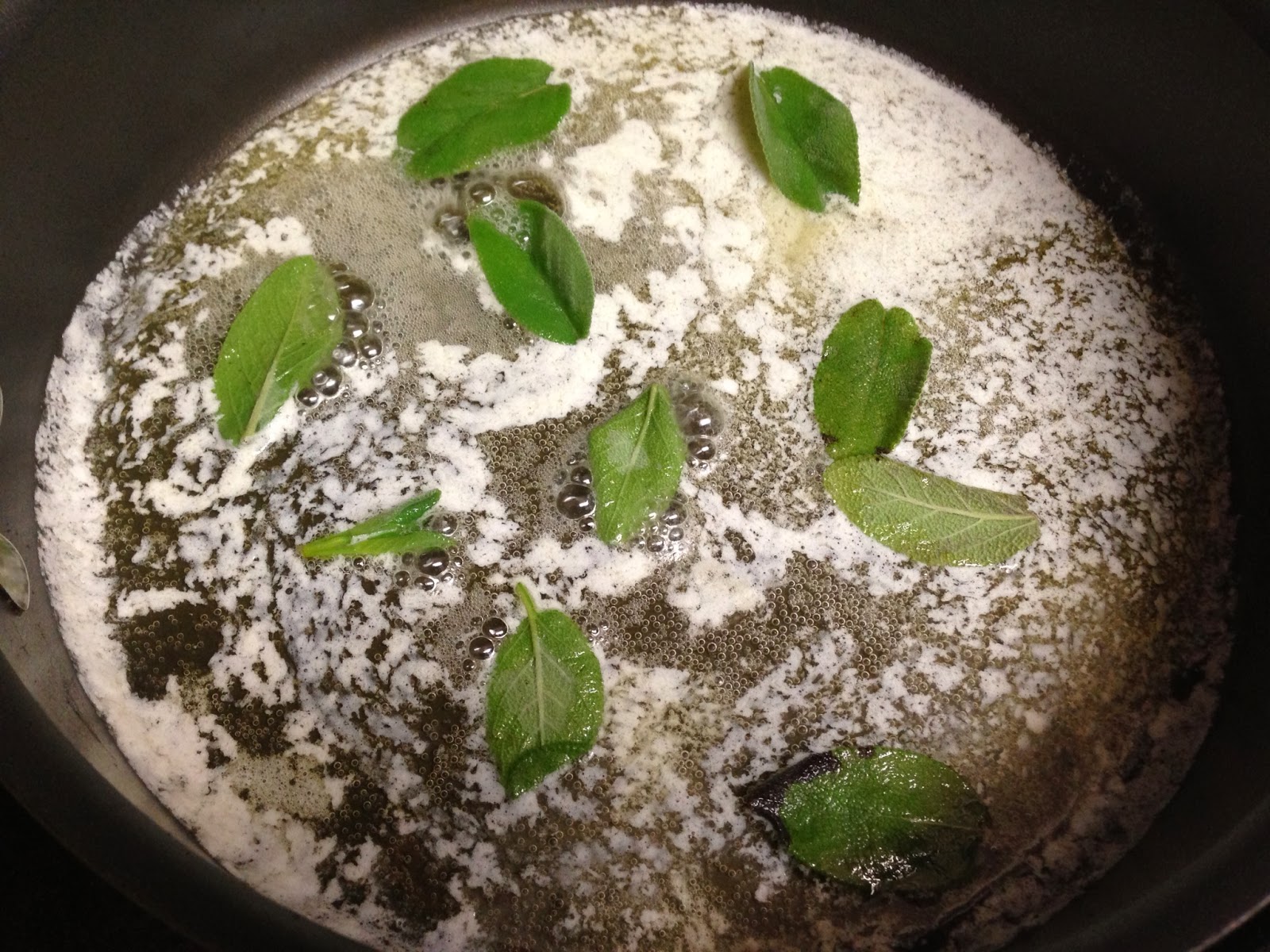 Once the ravioli are done, put on a plate, pour the butter sage sauce over them, and place fresh shavings of parmesan cheese and enjoy! 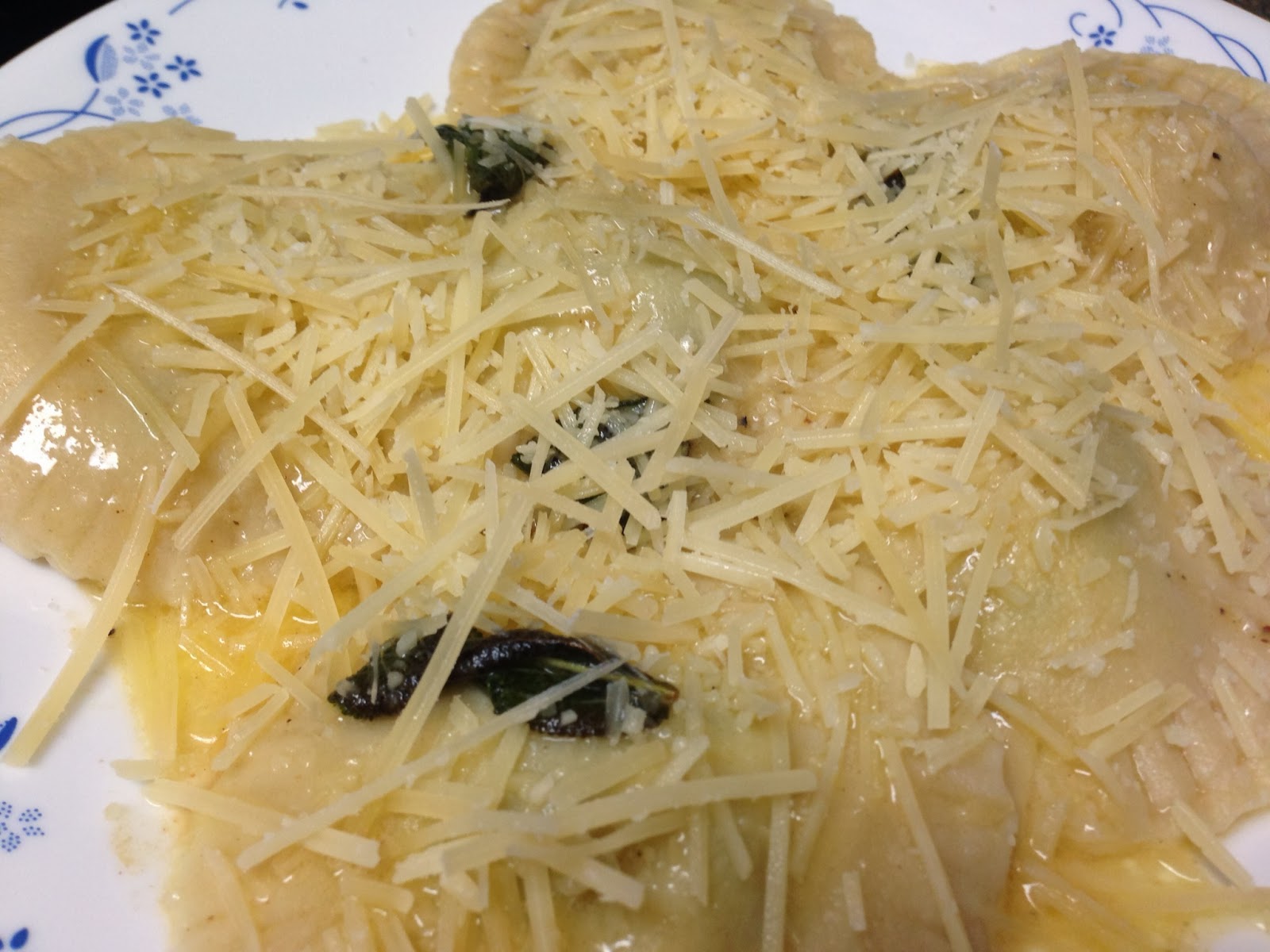 Our first adventure making pasta after Italy was a success. The small kitchen makes for a challenge to rolling out the pasta so I actually rolled out one batch of dough into 4 rounds to accomodate my cutting board. I can't wait to have granite countertops and a larger kitchen!